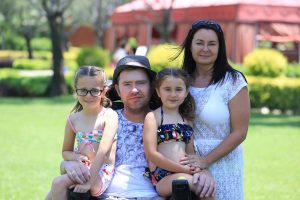 As title suggests I have decided to do this post in diary form, but before I start a little introduction.

The two weekends previous we were away, the first was at fully charged at Silverstone and the second we went to a concert at the O2 in London, pre booked before the holiday.  Health wise I was not eating due to lack of appetite and been tube feed but drinking.

We were 1.5 hrs late setting off as you do if you’re the Liversidge’s, so of course there was then an hour  delay the on motorway, so that left half hour to unload check in and to get to the gate. Oh but we appear to be a case short, it’s still in the lounge some 120 miles away and no time, that’s no clothing for Liz. The pre arranged assistance was no where to be seen, so much for forward planning, the meet and greet parking guys were great at stepping in to help.  Luckily for us the plane slightly late.  I had pre ordered the Eagle two hoist  which I had proof of, it was at terminal one but we were at terminal two and delayed take off by one hour, we then used the time to arrange DHL to collect the case on a two day service at a cost of £167.86 which I didn’t consider to bad. Finally we boarded, but the flight crew were amazing.

It doesn’t stop there, we arrived one hour late which is fair enough, there was no pre arranged assistance so eventually we managed to obtain some, why would you need assistance?  Take a look at the picture, the girls shared a case and we had one each the rest was medical equipment.

With me not eating Nutricia my tube feed company had my food shipped to Antalya airport ready for us to collect.  Err nope; no one knew anything about, surprise surprise. Getting any help at one in the morning wasn’t going to happen so we had to leave without it.

Ideal time to explore the hotel you’d think, well for Thelma and I the breakfast restaurant was about the extent of it.  Liz and the girls stayed by the pool and as the hotels shop only offered €110 bikinis, Liz opted to swim in her underwear, unfortunately no pictures were allowed but she carried it of well.  Meanwhile I and my partner in crime Thelma set about the great peg food hunt.  First port of call was guest relations to enlist a Turkish speaking person.  After lots of words I didn’t understand it was established that I, meaning Thelma and I along with our passports and visas would have to return to the airport to collect the feed.  Turkey doesn’t do wheelchair taxis so our options were, ambulance at €400 exciting perhaps but not cheap or an airport taxi at €110 bargain. So of we go to the airport, when we arrive no one has a clue where the building is we need.  Eventually the taxi driver found someone one who did lots of gesticulating to the driver and it’s of to a completely different part of the airport.  Now you may remember they needed me, well where we had ended up was customs, and would you believe it the customs building wasn’t accessible, so yours truly ended up in a hot van with a none English speaking Turkish taxi driver.  You can imagine my sheer excitement and drink was running low, this lasted 2 hours, meanwhile Thelma was busy haggling with Turkish customs trying to explain how the feed is administered and what the pipes are for.  Finally they allowed it to be cleared for a fee of approximately £50.  So with a one hour trip either way that was 4 hours gone and £150.  Might I tell you that I was being peg fed prior to our trip, well about that, that night and for the full duration of the holiday I ate 3 meals a day and dessert; I have put ½ kg on.  As you can well imagine I was about as popular as a fart in a space suit.