I like to do things for the girls as memories for when I am no longer here; this has come in many forms.  Some examples are cards for their birthdays, which I enjoy throwing away when another birthday goes by, one more I get to see.  I have some gifts for birthdays like Disney ear rings from when we went to Disney World and so on.

This one has been on my bucket list since day one.  So I actually have lymphoma to thank for this one.  So I mainly have lymphadema in my legs but a tiny bit in my hands, not noticeable but enough to stop my rings coming off. I have known this for over a year but it hasn’t caused any problems or pain.  I never take them off, my wedding ring hasn’t been off since Liz put it on nearly 9 years ago, and it is really important to me and means so much.  The other one I got for my 21st and has never been off, it even had a bit of slag on it from welding. As they would not come off and I felt the time was right, it was down to the surgery, problem, oh we don’t do them anymore because of health and safety, really lol. So of to minor injuries lol, yep we can do it, so 20 minutes later and a lot of arm ache for the nurse twisting the manual machine and they were off. Then we ventured to the jeweller to find out the financial damage caused by lymphadema, this was the perfect time to do my memory on the bucket list.  Melt the rings down and make two identical rings with engraving for each of my girls. So Thelma relayed this to the ladies in the shop, I knew it wouldn’t be cheap but could I even put a price on it. The nice lady gave me the price, well it wasn’t what I was expecting, but nonetheless I knew what I needed to get it done.  They advised me to give it a few weeks for the fingers to return to there normal size as they had left marks and that they could not guarantee that they could be melted together.  We left the shop and just as we were about to walk away the lady came out and said my daughter is an apprentice jeweller, if you are happy for her to do it we can do it for nearly half the price.  This was great news but still was a good chunk of money and would take some saving. 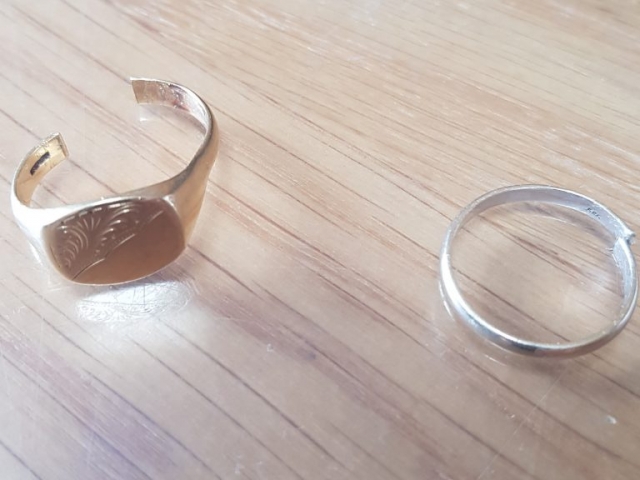 A couple of months past and I had the money saved so we went back in, turns out that indirectly Thelma knows the lady ,typical.  So we got my fingers measured and set the wheels in motion, it should be about a week.  Next day we had a voice mail saying they were ready.  Couldn’t believe it but I was rather excited.  So we went to see and arrange the engraving, wow they looked great and stupidly shiny, we like shiny things, normally car or bike parts but I’ll make an exception this time. We had planned to be able to do the engraving but due to my wedding rings size that way wasn’t possible.  Yet again Guest and Philips came to the rescue, they gave me the worst price it could be and I agreed, well I wasn’t going to stop now.  It was a week and it was done, yet again they worked magic and it was a third of the quoted price.

I think you have to agree they look fantastic.  I can’t thank Amanda and Savannah Beal enough along with Guest and Philips who facilitated it.  Yet again I am struck down by people’s generosity and kindness, in the world we live in it is a really nice feeling. Click the images to read the engraving. 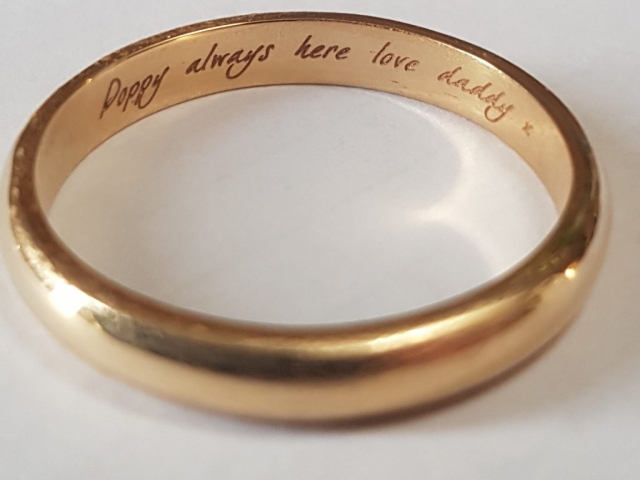 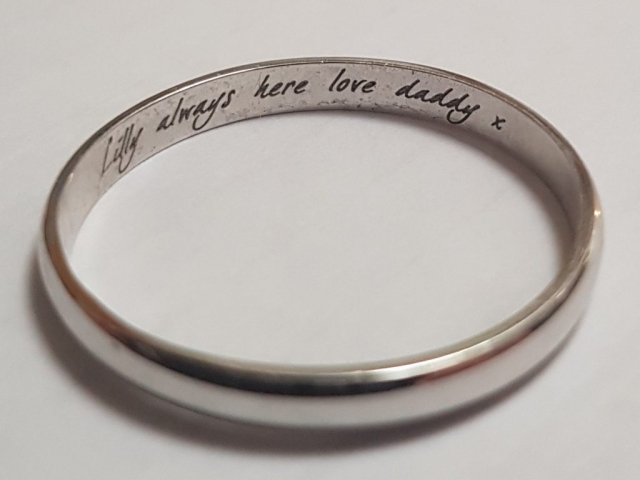 So no one knew what I had done as we have so many things on going, I didn’t have the best timing, but no time at the moment is good, but I showed the girls and Liz, I saw a small tier in Liz’s eye and then for the next 45 minutes there was a lot of sobbing, Liz had to explain the girls why they couldn’t have them now, they thought they were for them now, which meant telling them why they would get them later on. After a lot of hugs Poppy was okay, Lilly however took it a bit harder. Both girls are so brave and hopefully they will have to wait a good while to get them.