Blimey, third attempt at this blog, keep starting it, failing to save it, get on with something else and lose it. so here goes and it was meant to be like the last blog of 2019.

There simply is no other way to say it, 2019 was the worst year of my life, it had some stiff competition, losing my father 2 days before my 13th birthday, diagnosed with fabrys 2012 and being diagnosed with mnd 2013.  2019 beat the lot. It was a year that put untold stress on our family, ripped it a part like an earth quake, leaving a hole that will never be filled.  As if that wasn’t enough, then my step daughter lost her husband 2 days before Christmas, 10 days short of their first wedding anniversary. It was that bad Liz did a post on it; I shall include that at the end. You’re probably wondering what could be so bad it beats mnd, just trust me, it does.

So in light of this I don’t want to tempt fate but kind of hoping for a better year.  So how has 2020 kicked off and what does it have in store? "The future is not set. There is no fate but what we make for ourselves."  I believe this to be true, just because my body is failing doesn’t mean I am.  In fact just over Christmas I have noticed my left arm now struggles to put my hand on the joystick of my wheelchair.  This has had an effect on my record attempts, I need my left hand to drive so the team are pushing forward.  we are having serious electrical problems, mainly because we are controlling 2 high power motors designed to run on motorbikes, to work on a wheelchair control.  As there isn’t a manual for this, it’s trial and error.

We plan to go abroad again, hopefully with a night carer too, this way it’s a lot easier on Liz, she will actually get some rest.  We have booked centre parcs for March, a little early perhaps and cold but it is so expensive.

My health is obviously an issue, next month I will be present at a mdt (multidisciplinary team) meeting as they are discussing my tracheotomy, which I hope they aren’t planning on it soon, not sure it would be a top plan to do 60 mph down Elvington runway 26 with a ventilator in tow.  it was suggested by Liz that it might be a good idea to let me attend , never been to one, sure I can spice it up. My voice is useless now, I thought I was prepared but it turns out I wasn’t.  People don’t have time in today’s society to let you type a reply.  Everyone says how wonderful it is, and it is.  The amount of time I write something and delete it because the conversation has moved on or the person has gone, even going off thinking what an ignorant person because I didn’t reply. You also lose the ability to join in conversations.

Lastly Monday will see the arrival of my new wheelchair, finally, also Tuesday will see the start of the second fix of my new van, only taken a year so far. I will leave with this image, says it all.  Also my wife’s post.  I’ll be back 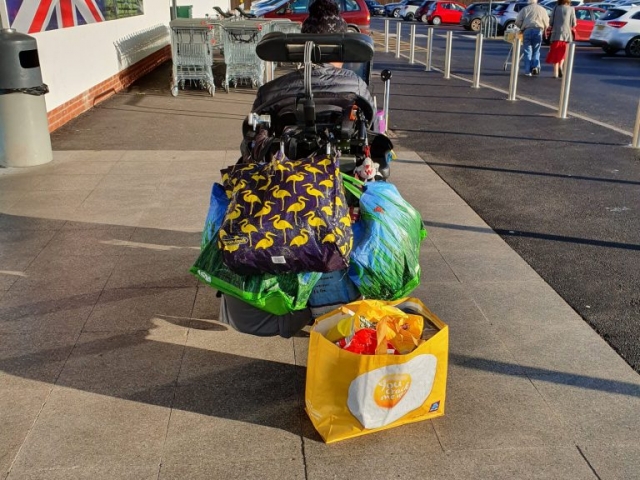 Behind those smiles there is great sadness. Our family has been torn apart and our children's lives changed forever by people that are supposed to love and protect them. Jason developed pneumonia & nearly lost his life, his health has deteriorated, his speech is beyond recognition and every day is harder than the last. We have had a constant battle with the authorities and incompetent care companies to get the care that he needs. I struggled to keep my shit together and had 6 weeks off work with stress. It has been relentless and exhausting and to top it off our son in law died 2 days before Christmas leaving my daughter a widow at 26!

All in all 2019 has been the worse year of our lives & we will be glad to see the back of it! But we aren't ready to throw the towel in just yet, bring on 2020! Happy New Year to you all!
#MND #ALS #lifecanbecruel #makingmemories